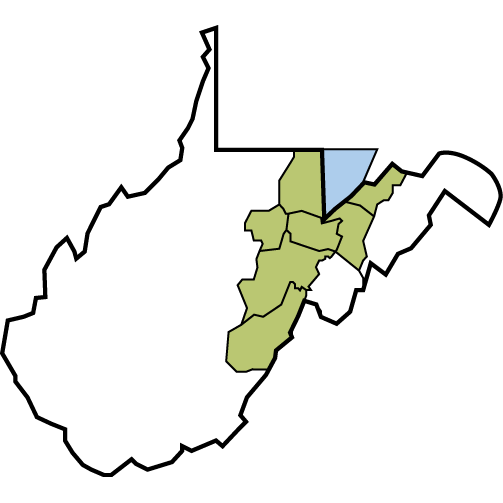 Anyone who is familiar with this area knows about driving on twisty roads. Even if your kids don’t get car sick, you likely know a few tricks about how to get where you’re going, from straightening out the curves to picking the best route around Forest Fest traffic. You’ve probably realized that though there may be three different ways to get from here to there they still take the same time to get there. Maybe you’ve started traveling with a chainsaw, in case of blowdowns, or a hitch chain. Everybody goes in the ditch once in a while – just depends if it’s you or them.

Personally, I take little crumpled pieces of paper with rudimentary maps on them. I like to get a sense for the terrain that I’m going through and generally to know my place in the landscape. For the trip into Pocahontas County I made this map and found that, despite its silly nature, the actual road met and exceeded my expectations.

Hillsboro: that’s right. Someone tried to make the bed there in town and shoved the wrinkles right on over to Lobelia.

Friends there told me they used to go visiting in the winter for something to do. They would hop in the car, careen down the driveway, through the creek, and then drive as far as they could through the drifts. It couldn’t have been more than two miles of hills between houses, but they parked the car wherever it stopped moving and hoofed it from there with plans to spend the night. The next day they would hike back to take the car home, such was the traffic on that road. No one else was trying to get through.

And did you know that Pocahontas County is shaped like a cat, a sitting cat? You did know that, right. Up there in Durbin area, that’s the cat’s meow. Down here Lobelia-way, that’s the cat’s tail. And the Greenbrier River is it’s spine.

––excerpted from the 2015 Annual Report